As Francis watched the oar float away she felt fear crawl up her spine, all she could think about was what was under her.She tried to convince herself that it was nothing but she knew that it had it be something that took her oar, so she curled up into the corner  of the boat and cried.

Ten minutes later she got up and looked over the side again, suddenly the knock came so hard it flipped  the boat entirely. Now in the water, Francis screams for help but no one comes , everyone is asleep. It was pitch dark so she couldn’t see that well but then she felt ripples in the water and when she turned around she saw something swimming towards her.

She tried to identify it but when it came closer it became larger and it had a pitch fork in its hand holding up but it was now bigger than any  man she has ever seen but as it came closer the It was a Monster. She started swimming for shore, Francis swam hard but not hard enough so she gave up and tried to warn her family so she wrote in her diary before suddenly  she was dragged down by a mass of hands and drouwd, but the body was never found. 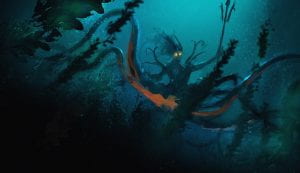